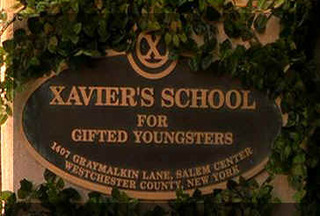 Who’s your favourite member of the X Men – or X Person (if you feel that a group of super heroes of both genders should have had an appropriate name change by 2016)?

Is it Wolverine, with his wolf-like retractable claws and less wolf-like self-healing powers, or Cyclops, who wears cool designer ski goggles because red laser beams constantly shoot from his eyes. You might favour Storm and her ability to roll her eyeballs 360° and manipulate the weather, or Rogue, one of the coolest for her knack of absorbing the abilities of others thus rendering her all-powerful (and consequently, in the patchy  X Men 3, just a little bonkers).

To be honest, Marvel’s X Men – created by the amazing Stan Lee and artist Jack Kirby in 1963 – now one of their most successful comic book and movie franchises, is a bit of a swizz. Coming up with a collection of superhero mutants with different powers (and admittedly silly names and even sillier costumes), Stan Lee knew that his characters could literally do anything – which means the stories would end up becoming more outlandish and ridiculous as the years went by. Kicking off as a clever commentary on race and equality in the turbulent early 60s, these all powerful characters would end up only being able to fight each other before Lee and his writers had to think of even more astonishing beings that would challenge them. You’ve seen the movies, well the comics are even more mind-boggling.

I do love the X Men (although I’d say the movies peaked at X Men 2) but I always wonder if Dr Xavier’s school for gifted children – where these extraordinary mutants are taught to harness their gifts – should offer courses for those with more mundane, everyday powers. Perhaps you have the amazing ability to open jars that have been closed too tightly. Off to X Men school with you! They would call you The Twist. You might have an uncanny sense of direction. You’d be in there too and your X Men name would be SatNav. Perhaps you just give incredible hugs, the kind that have awesome regenerative powers. You’re enrolling! You will be known simply as The Bear.

These powers are no more useful than teleportation or the ability to manipulate metals with your mind. They might even be more useful. How are these X Men going to find their way to a battle without SatNav – or more importantly, find their way out. Where do they go if their feeling a little low? That’s a job for The Bear.

So what would your X-power be? What gets you into X Men school? Are you particularly good at Sudoku? Do you always arrive on time? Perhaps you have an uncanny memory for pop lyrics of the Nineties. I’ll get you an application form.

My power is that I am incredibly good at finding things: keys, wallets, school ties, household bills – if you’ve mislaid it, I can get it for you. I’m pretty sure I’d walk into X Men school with that humdinger. I bet Wolverine is always losing stuff. They’d call me Findo. Now, I need a costume.